RotaChrom has developed a revolutionary preparative purification instrument called Industrial Scale Centrifugal Partition Chromatography (iCPC). This system does not utilize any solid stationary phase (such as silica gel) to achieve precision molecular separation and is demonstrably superior to conventional liquid chromatographic techniques in terms of yield and purity. In addition, the iCPC platform has radically reduced the costs and number of steps associated with downstream method development for an eclectic array of purification challenges.

Within this system separation occurs between two immiscible liquid mobile and stationary phases. The CPC cells, attached to a large rotor, are filled with the liquid stationary phase and immobilized by the physical properties of the system. The mobile phase moves through the stationary phase in the form of tiny droplets. The large surface area of the droplets assures optimal interaction between the phases.

Like conventional liquid chromatography, separation of the injected sample is based on the sample component’s varying partition coefficients between the mobile and stationary phases. The partition coefficient dictates the amount of time each molecule spends within the mobile and stationary phases and therefore the rate at which each molecule travels through the system. At the end of the loop automated fraction collectors separate and collect all selected fractions. 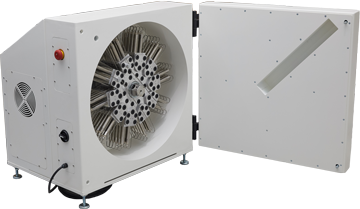 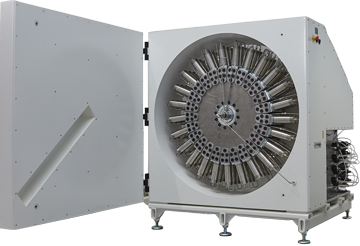 Drawbacks of Conventional Cell Designs as Revealed by Simulations and Flow Visualizations:

It is VERY difficult to ensure cleaning validation of conventional cell designs, as the rotor must be disassembled using hydraulic press, making simple and fast maintenance and cleaning almost impossible.

Run with 30 cells – Industrial Preparative Chromatography on the Next Level!